Striving to bring you the best in Techno from around the globe. Refusing to discriminate between the underground and the mainstream, the freshest artists are featured covering the broad spectrum of the Techno genre. 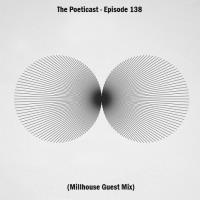 The Poeticast is delighted to play host to Berlin Native Millhouse this week as he showcases his own brand of electronic music.

Millhouse has been bangin' out the tunes for over 15 years, playing in venues throughout Ireland. He has worked along side with some great DJ's and producers in the industry; including Dave Clarke, Marco Remus, Luke Creed, Rhythm Technologies, Diarmaid o Meara, Dave the Drummer, Alex Calver, Patrick DSP and many more. Millhouse's main influences have been Dave Clarke, Diarmaid o Meara and Luke Creed. Millhouse spent some time as resident with Infect3d (Ennis) and Kinetic Beats (Limerick) throughout his career as a DJ. In 2010, Millhouse saw his first few releases, firstly a collaboration with Luke Creed on Kamikaze Records. His first solo release on Gobsmacked Records’ 50th release along side other techno hard hitters Space Djz, Vegim, Concrete Djz, Diarmaid o Meara, Luke Creed and Karl Cullen. Since then Millhouse has had his tracks played by some of the biggest stars of the techno world and continues to play the freshest most original techno tracks.

In January of 2013, Millhouse made the decision to move to Berlin to work closer with the Gobsmacked Records label. Since moving to Berlin, Millhouse has played several gigs with some of techno’s biggest hitters such as Gayle San, Patrick DSP, Chris Colburn, Ant Prescott and many more. Along with this since moving Millhouse has seen a string of releases on such labels as Viral Outbreak, Switch Off,Mk recordings, Elmart and of course Gobsmacked.

Millhouse continuously shows his musical dynamics in mixing and producing. He's known and respected for his dynamic ability to play tracks from Dark Driving Techno to Funky and Hard Techno and his love for solid base beats and driving basslines.

More info on the artist:

Striving to bring you the best in Techno, Drone and Industrial from around the globe. Refusing to discriminate between the underground and the mainstream, the freshest artists are featured covering the broad spectrum of the Techno genre.